By: Press Team
With: 0 Comments

Ana Mineva, the female co-founder of DGLegacy®, has been interviewed by Authority Magazine, a Medium publication devoted to sharing interesting and in-depth interviews featuring people who are authorities in Business, Pop Culture, Wellness, Social Impact, and Tech.

Since 2018, Authority Magazine has conducted more than 50,000 empowering interviews with prominent authorities and C-Suite executives of companies such as: 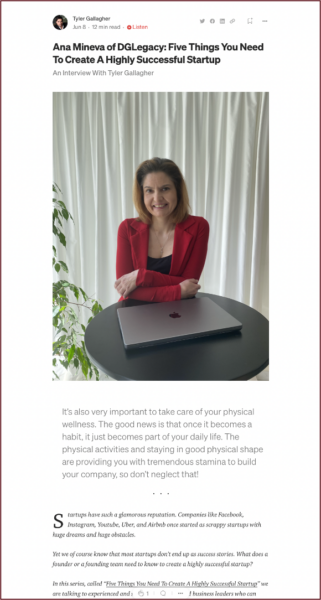 During the interview, Ana Mineva shares more about her “backstory” as a tech entrepreneur and how it all started.

Finally, Ana makes recommendations to founders on how to best take care of their physical and mental wellness when starting a company.

A very important topic to which every founder must pay special attention.

The whole interview can be read on Ana Mineva of DGLegacy: Five Things You Need To Create A Highly Successful Startup.

How to protect your crypto

“Crypto investments don’t need protection.” In this article, we won’t get into basic definitions. There’s a crypto inheritance article we’ve published on cryptocurrencies in the context of inheritance that provides

END_OF_DOCUMENT_TOKEN_TO_BE_REPLACED

The case for password managers We are witnessing society’s ever-increasing online presence these days. There are digital and financial assets, social networks and online accounts, digital wallets, mobile banking and